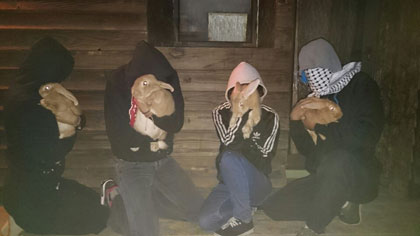 After seven continuous weeks of badger cull in the UK, Unoffensive has taken a bit of a blow. We are aware that we’ve not been publishing as regularly  as normal as we have been busy and exhausted during the campaign. For that reason, we have a lot of things to talk about and this update is just the first one of five to come in the next days.

The badger cull was grim and disgusting, but also a lot of fun. Our comrades at Underground Badger Syndicate have been working hard and it was great working alongside them. Many cages later, loads of farmers angry and shooters sent back home with their guns in the carrier, the cull has ended. We’ve seen the grim side of the countryside as per usual with traps not only for badgers but for every wild animal you can imagine. We’ve seen badger setts completely destroyed by the cull, but also setts that have kept as lively and strong as they were when the cull started. It is always wonderful to see badgers fucking about at night after the cull is over, and we also managed to do so. So as every year, the cull was exhausting but rewarding and we would not dream in a million years missing out in such an important campaign.

Back to our media business, we’ve been lacking publishing our usual. We’ve now scheduled all hit reports plus a few A is for Anarchy and ALFridays for you to learn and enjoy. Technology 101 is taking a little break, but it will come back soon without a doubt.

We need some time to unwind after the campaign, but we would be enormously grateful if you contacted us in relation to other campaigns and actions happening in Europe, maybe we can meet up and join the fight!

We have one workshop booked at the beginning of January in Switzerland. We would be happy to give talks in other places if folks are interested. We do not ask for money (we’ve been told that certain saviours do for some strange reason) and really we just need help finding a venue and promoting it locally. So if you want us to visit and have a chat (and live within Europe as visas are difficult and transport would take us forever) drop us an email or a PM and let’s get it sorted!

A little something folks could really do to help us out is too share our social media and posts. Instagram seems to have been doing more or less ok and we’ve not been taken down in a long while, but our facebook page is still suffering after the last ban. Share us and comment, like the posts, recommend us to others, whatever!

For the upcoming updates on merch, a money transparency post and a Liberate or Die call out, keep an eye as we will post them in the next few days.

As always, we are super appreciative of the support, so if anyone is willing to join our Patreon team and can afford it (please, do not put yourself in money trouble), visit the link and drop us a couple of coins a month!

UNTIL WE FUCKING WIN.