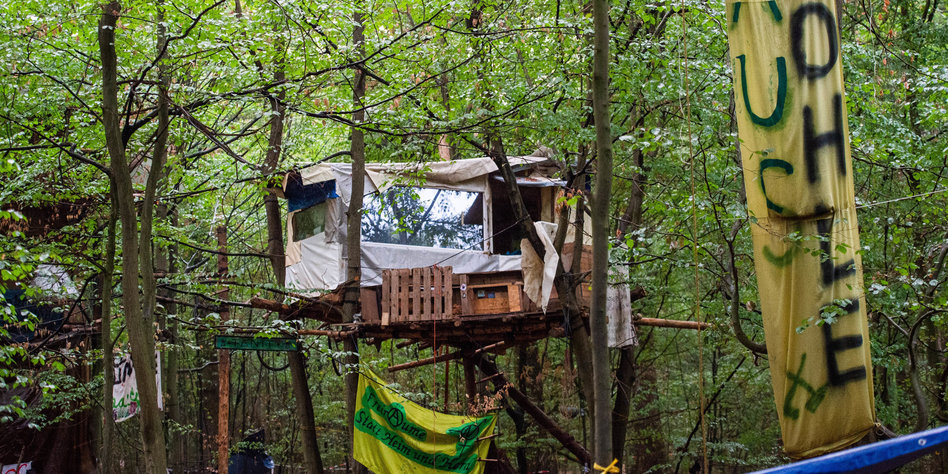 Oaktown has been for the last three days the main focus of the eviction. After cutting many people out of their lock ons, they attacked Simona (pictured below). Simona is a ground structure that kept a little secret inside, a reinforced tunnel that kept the cops occupied for quite a long time. Police had no problem driving over the tunnel, endangering the multiple activists locked underground, and resulted to lift the whole house out of the way to access the entrance of the tunnel. Right now, Oaktown still resists, with one activist comfortably sleeping in a hammock in the highest point of a tree.

Yesterday the forest walk brought thousands of people to the small town of Buir. Packing train after train with angry people from many different cities, the police tried to control them on the line of the forest and announced that the forest walk was cancelled for the day. As if the police was able to cancel the walk! With great rage and spirits, hundreds of people broke the police line chanting “We want a forest walk!” and accessed the woods of Hambach. Once in the forest, the police was visibly outnumbered, having to face hundreds of people that made machines get out of the woods and even surrounded one of the police tanks, that had to hastily run out whilst police forces used violence against crowds chanting “We are peaceful, what are you?”. Today, the police has focused on Gallien and on the Westside Warriors (Beechtown and Cozytown). Latest news from Gallien report screams of pain coming out of Bolo.

Meanwhile, around Germany but also in many other countries, support actions have been sending solidarity to all the seedlings in the forest. From banner drops to planting trees inside of embassies and RWE offices, people have been getting creative. The latest report from the legal team shows 100+ arrests during the evictions, with 18 people still in custody.