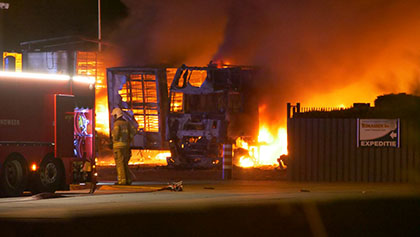 The Animal Liberation Front has claimed responsibility for an arson attack in the early hours of May 28 at the duck slaughterhouse Tomassen Duck-to in Ermelo. Five trucks and two trailers were completely destroyed. Activists also attempted to start a fire inside the slaughterhouse.

In the claim of responsibility, sent anonymously to Vrije Dier, activists explained that their goal was to hit an “already weakened duck industry.” They added, “We are aware of the danger of arson, but the daily murder of innocent animals has to end.”

EDITOR’S NOTE: Since the action, a person gave themselves up claiming to be responsible for the arson and is now waiting trial. We will update legal information and support groups when we know more.