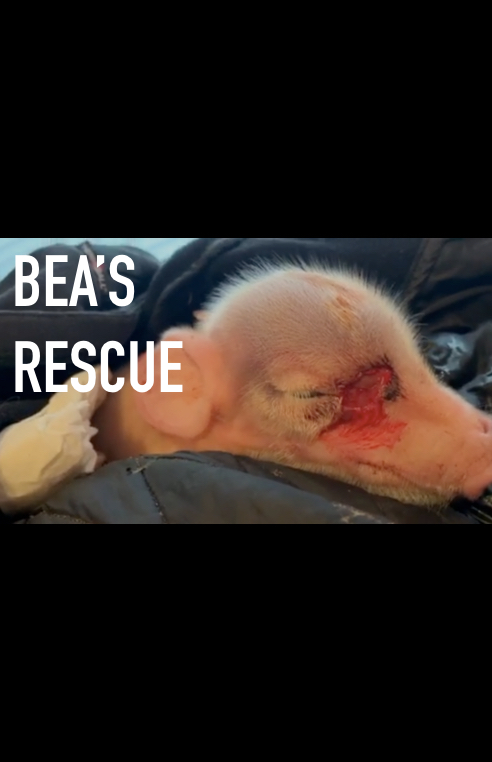 “When we found Bea, we knew she didn’t have long. We believe her mother unintentionally stepped on her during birth causing a large gash where a part of her snout was completely gone, she was only 4-6hrs old when we found her. As the morning progressed into afternoon, the bruising on her head became darker and more pronounced.

We knew that she would not make it but we still remained hopeful. Either way, we wanted her to leave this world with dignity, respect, love and warmth. If she was left behind, she would’ve had to endure blunt force to the head or left to slowly die next to her family. Bea’s situation is not an anomaly, it is the norm, it is a cost of doing business; she is considered a product and treated as such. There a millions of piglets who do not survive their first 24hrs of life, left to die in front of their mothers and siblings, killed in front of their mothers and siblings, discarded like trash. Bea had endured more suffering, pain and trauma in 28 hours than any of us can even imagine or endure ourselves.

When we view non human and human animals as commodities, exploitation comes easily. We strip any individuality from them, we turn them into biological machines that have only one purpose, to serve.

Bea was someone, she mattered, she was loved and died with dignity. Her mother is still trapped inside that shit hole, her siblings will be sent off to be murdered; neither will ever know respect, dignity, love or warmth, only endless suffering and misery.

PLEASE NOTE THAT ALL REPORTS PUBLISHED BY THIS WEBSITE ARE RECEIVED ANONYMOUSLY AND DO NOT SEEK TO INCITE OR PROMOTE ANY RELATED ACTIONS. OUR PURPOSE IS MERELY INFORMATIVE